International women’s day is a day to ruminate what it means to be a woman.  It is a day to critically reflect upon the current status of women around the world, but also a day to celebrate all that women are.  We are mother’s, sisters, doctors, lawyers, lovers, fighters and everything else in the whole spectrum of being present in today’s world.

We are also athletes, and I believe in the transformative power of women’s athletics.  Nothing affirmed this belief like the women’s rugby team at the Zona Rural where I lived and worked last year.  I would like to dedicate this post to the deepest feminist experience I had in Brazil – my women’s rugby team.

Below is a news report on the sport and our teams (my very first TV appearance here in Petrolina) and also the text (translated from Portuguese to English) from a poster I’ve presented in two national conferences about rugby and feminism.

Happy International Women’s Day– now get out and play.

The women’s rugby team commenced at the Zona Rural in March 2011 (the same time as the male team) and has been vibrantly active since, competing twice since its inception and practicing weekly.  Due to the high level of contact and aggressive nature of the sport, women’s rugby provides for a fascinating intersection of feminism and athletics.  Using the four main feminist theories described by Professor Elizabeth Hackett of Agnes Scott College, this section details how Rugby Feminino at the Zona Rural illustrates women´s liberation and empowerment in action.

The female team is humanist in the sense that there is woman’s team, just as there is a men’s team, with the same resources, practice time, balls, competitions, etc.  The equality between the two teams is empowering as it shows that the women’s team, and its young female players, are as equally important as the men’s team.  They are equally as strong, skilled, athletic and able.

It is important that there is a women’s rugby team separate from the male team.  As rugby is a sport involving high levels of physical contact and tackling, the differences of height and weight between men and women require that they compete separately.  In accordance with the gynocentric approach, the female team at the Zona Rural values women’s athletic contributions while affirming separate but equal athletic qualities between men and women.

Besides occasional male coaching or refereeing, the women’s rugby team at the Zona Rural is matriarchal.  With the exception of minor guidance, the Women’s team is largely self-administered:  warm-up, stretching, practices and practice matches are largely self-run, providing invaluable leadership opportunities and offering an alternate, radical model to the patriarchal society at large.

A major outcome of this apparent conflict is that on an individual level, the female players learn that they are in control of how they want to be defined. They are the masters of their identity and nobody can tell them what they are. They are empowered by learning that to be a woman, to be who they are, means what they want it to mean. In a society that is constantly telling women that they are weak and sensitive, they are actively proving that, as women, they are strong, courageous, powerful, athletic and capable. The women’s rugby team is breaking gender stereotypes on campus and in the community of Petrolina, playing in inter-campus games, appearing on local news Channel 4 and now internationally to those reading these words!

In the middle of April, I kicked off the weekly meeting of the American Club at UPE – Campus Petrolina. (Check out the calendar of future events here.) Our first meeting’s theme was one of the things I am most excited to teach here: baseball! I am a big baseball fan, and the start of the national leagues’ season in April seemed like an appropriate time to begin teaching the sport to my students. 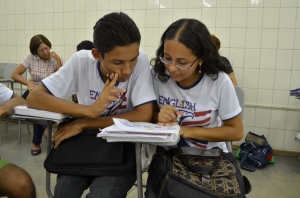 It was just a start, but a great start—we have some important new vocabulary, a basic understanding of the rules (three strikes and you’re out; run around all the bases back to home plate and you get a point), and perhaps most crucially, we produced a lovely rendition of “Take Me Out to the Ball Game.” Below, I’ve posted my presentation, for curious readers but particularly for students to practice the vocabulary!

For future classes on baseball, I’m excited to get to teach baseball idioms (sneak preview: “When we meet for class again, I want to practice our song right off the bat! = “immediately”). I also want to talk about minorities in baseball and the story of Jackie Robinson, as well as get into some more controversial questions: what about women in baseball? Is baseball democratic? Teaching this stuff makes me so happy; it almost doesn’t count as work. (But as we said in a previous post, work and fun are often synonymous here.) 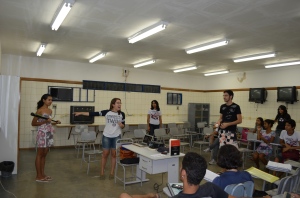 After I finished teaching yesterday, I ran into a few students who hadn’t been able to come to the class. They saw the baseball bat sticking out of my bag (yes, I brought one) and asked if they could play. Uh, of course! This part was totally unplanned: stumbling through an impromptu game of baseball in the courtyard at 9pm with a bunch of Brazilians. Three trees were our bases, and no one had gloves, but that’s the best thing about sports like this—for basic functionality, you need minimal equipment. Mostly the men played (and one woman, plus me), but other students gathered around to watch, and it reminded me how much physical games can bring people together. And even better, it was none other than America’s favorite pastime bringing us together. This is exactly why I am here. Since language and culture are so tied, even if I’m not great at teaching English grammatical structures, at least I can provide the cultural component—with barely any effort; simply my presence and a bat and ball.